Your cart is empty.

Home  ›  Blog  ›  Everything You Wanted to Know About Gynecomastia (Man boobs)

Everything You Wanted to Know About Gynecomastia (Man boobs)

Everything You Need To Know About Gynecomastia 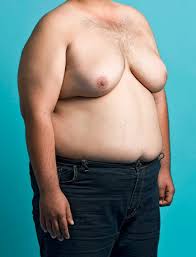 Gynecomastia surgery (a.k.a. male breast reduction) is one of the most popular cosmetic procedures for men in the U.S. Here, a deep dive into the condition colloquially known as 'man boobs' and how to treat it.

While we colloquially know the condition as 'man boobs,' the medical term for the swelling of the male breast tissue is gynecomastia. According to the Mayo Clinic, at least 25 percent of men ages 50 to 69 are affected by gynecomastia, and gynecomastia surgery (read: male breast reduction) is among the most popular cosmetic procedures in the United States. The American Society of Plastic Surgeons' (ASPS) 2018 Plastic Surgery Report found that there were nearly 25,000 male breast reduction procedures performed in the U.S. last year — a 22 percent increase since the year 2000.

Gynecomastia is an endocrinology disorder where there is swelling in male breast tissue. The cause of gynecomastia is a hormone imbalance where there is a higher percentage of estrogen than usual. During puberty, boys’ bodies mainly produce testosterone and only a little bit of estrogen, which is the dominant hormone in girls’ sexual growth. When testosterone levels are lower than usual, the ratio between the two sex hormones is unbalanced. The higher estrogen levels can stimulate the male breast tissue to swell up. While gynecomastia does not impact health, it can be a cosmetic concern with emotional ramifications.

Gynecomastia can impact men at different stages of life and is often (though not always) caused by hormones. “At birth, newborn males often have enlarged breasts due to the residual effects of their mother's estrogen," says New York City-based plastic and reconstructive surgeon Umbareen Mahmood, MD. "A hormonal imbalance can again occur at puberty or in older men, resulting in a higher estrogen to testosterone ratio."

Boys born with enlarged breast tissue as a result of the estrogen in their mother's placenta will usually see the swelling dissipate after a few weeks. Pubertal gynecomastia, meanwhile, impacts young men during puberty (beginning as early as age 10) and can last for several years (up to age 18). Cases of gynecomastia peak again later in life. As men age, they experience declining levels of testosterone and an increase of fatty tissue, which can lead to senile gynecomastia.

But it's not just hormones. Causes of gynecomastia can include medical conditions like obesity, malnutrition, liver disease, hyperthyroidism, hypogonadism, prostate cancer, and kidney failure. It can also be a side effect of drugs (marijuana or heroin), prescription medications (anabolic steroids, corticosteroids, digoxin and calcium channel blockers, Flagyl, Propecia, Spironolactone, Valium, and Zantac to name a few), and even herbals (e.g. lavender or tea tree oil). "There is not necessarily a distinct difference in appearance based on etiology,” Dr. Mahmood says.

How to Diagnose Gynecomastia

When gynecomastia first starts developing, the breast pain can be startling. The first sign may be a lump of fatty tissue (not unlike male breast cancer), and your doctor can perform a physical examination and tests (e.g. a mammography or blood tests) to rule out the possibility of cancer. As the swelling continues, the lump may feel tender to the touch but the sensitivity usually subsides. While one breast may initially be larger than the other, they tend to even out.

Dr. Mahmood notes that the word 'gynecomastia' only refers to any enlargement of the male breast, but there are grading systems designed to categorize the various degrees of the condition. Dr. Mahmood personally recommends the Simon and Rohrich classification models, which have been condensed below:

While gynecomastia doesn’t necessarily cause medical concerns, male breast reduction procedures are on the rise to deal with the aesthetic and psychological impacts of the condition. The two most common (and effective!) procedures include liposuction, excision, or a combination of the two.

“Patients with mild to moderate gynecomastia, involving breast enlargement with minimal gland hypertrophy and no excess skin, are good candidates for liposuction only,” says Dr. Mahmood. “Many patients also have a small amount of fibrous glandular tissue under the nipple and this part can be treated with direct excision by making a small incision around the areola. Techniques such as power-assisted liposuction (PAL) or ultrasound-assisted liposuction (UAL) are especially helpful when performing liposuction for gynecomastia as they can more effectively remove the fibrous tissue.”

More severe cases may require more invasive techniques. “Severe gynecomastia requires not only liposuction, but also skin excision to address the ptosis and excess skin,” Dr. Mahmood explains. “In many severe cases, the nipple-areola may need to be temporarily removed and replaced as a graft to a more appropriate position on the chest after the sagging skin and tissue has been removed.”

During the recovery period, patients typically wear bandages and support garments to minimize swelling and support the chest as it heals. Depending on the type of procedure, a tube may temporarily be placed under the skin to drain excess fluid. Patients will experience swelling for several weeks, but most people can resume everyday activities within a few days.

The ASPS reports the average cost of gynecomastia surgery in 2018 was around $4,000, and it should be noted that most insurance plans do not cover the procedure.

While non-invasive treatments for gynecomastia lack the same level of efficacy as their surgical counterparts, a recent study found there to be three classes of medical treatment for gynecomastia — androgens (i.e. testosterone, dihydrotestosterone, and danazol), anti-estrogens (clomiphene citrate and tamoxifen), and aromatase inhibitors (letrozole and anastrozole) — though many patients did not show significant improvement after the treatment.

“Testosterone can be given if patients have an abnormally low level of the hormone and danazol, a synthetic form of testosterone that decreases estrogen production, may be somewhat helpful,” Dr. Mahmood says. “Generally, there is no real medical treatment for gynecomastia.”

Before turning to prescription medication, a better bet may be to eliminate any lifestyle factors that could be contributing to gynecomastia. “The first step in addressing gynecomastia is treating the underlying cause if it is due to a non-hormonal reason,” Dr. Mahmood explains. “This includes stopping any offending agents like medications or illicit drugs, removing a tumor, and treating underlying systemic disease.”

Gynecomastia affects a large percentage of the male population over the course of a lifetime, and, while the medical concerns related to the condition are minimal, men with enlarged breast tissue may seek treatment to reduce the size of their chest.

Whether patients opt for liposuction, excision, or a combination of the two, the results of gynecomastia surgery are generally permanent. It is important to note, however, that gynecomastia caused by non-hormonal factors like prescription medications, illicit drugs, or weight gain will require patients to maintain a healthy lifestyle. Consulting with a board certified plastic surgeon will ensure men receive the best course of treatment for their condition.

This article was originally published at AEDITION